Notebook is based on an initial version by Ben Heil

In this tutorial you will learn about:

These are the slides for the videos in this tutorial. If you want to download locally the slides, click here.

Install facenet - A model used to do facial recognition

Executing set_seed(seed=seed) you are setting the seed

One application of large CNNs is facial recognition. The problem formulation in facial recognition is a little different from the image classification we’ve seen so far. In facial recognition, we don’t want to have a fixed number of individuals that the model can learn. If that were the case then to learn a new person it would be necessary to modify the output portion of the architecture and retrain to account for the new person.

To achieve this, facial recognitions typically use a triplet loss that compares two images from the same individual (i.e., “anchor” and “positive” images) and a negative image from a different individual (i.e., “negative” image). The loss requires the distance between the anchor and negative points to be greater than a margin \(\alpha\) + the distance between the anchor and positive points.

Section 1.2: View and transform the data¶

After viewing the images, we will transform them: MTCNN (github repo) detects the face and crops the image around the face. Then we stack all the images together in a tensor.

Now that we have our images loaded, we need to preprocess them. To make the images easier for the network to learn, we crop them to include just faces.

Section 1.3: Embedding with a pretrained network¶

We load a pretrained facial recognition model called FaceNet. It was trained on the VGGFace2 dataset which contains 3.31 million images of 9131 individuals.

We use the pretrained model to calculate embeddings for all of our input images.

We want to understand what happens when the model receives an image and returns the corresponding embedding vector.

We cannot show 512-dimensional vectors visually, but using Principal Component Analysis (PCA) we can project the 512 dimensions onto a 2-dimensional space while preserving the maximum amount of data variation possible. This is just a visual aid for us to understand the concept. Note that if you would like to do any calculation, like distances between two images, this would be done with the whole 512-dimensional embedding vectors. Great! The images corresponding to each individual are separated from each other in the embedding space!

Popular facial recognition datasets like VGGFace2 and CASIA-WebFace consist primarily of caucasian faces. As a result, even state of the art facial recognition models substantially underperform when attempting to recognize faces of other races.

Given the implications that poor model performance can have in fields like security and criminal justice, it’s very important to be aware of these limitations if you’re going to be building facial recognition systems.

In this example we will work with a small subset from the UTKFace dataset with 49 pictures of black women and 49 picture of white women. We will use the same pretrained model as in Section 8 of Tutorial 1, see and discuss the consequences of the model being trained on an imbalanced dataset.

Run this cell to get the data¶

We can check the dimensions of these tensors and see that for each group we have images of size \(150 \times 150\) and three channels (RGB) of 49 individuals.

We use the same pretrained facial recognition network as in section 8 to calculate embeddings. If you have memory issues running this part, go to Edit > Notebook settings and check if GPU is selected as Hardware accelerator. If this does not help you can restart the notebook, go to Runtime -> Restart runtime.

We will use the embeddings to show that the model was trained on an imbalanced dataset. For this, we are going to calculate a distance matrix of all combinations of images, like in this small example with \(n=3\) (in our case \(n=98\)). 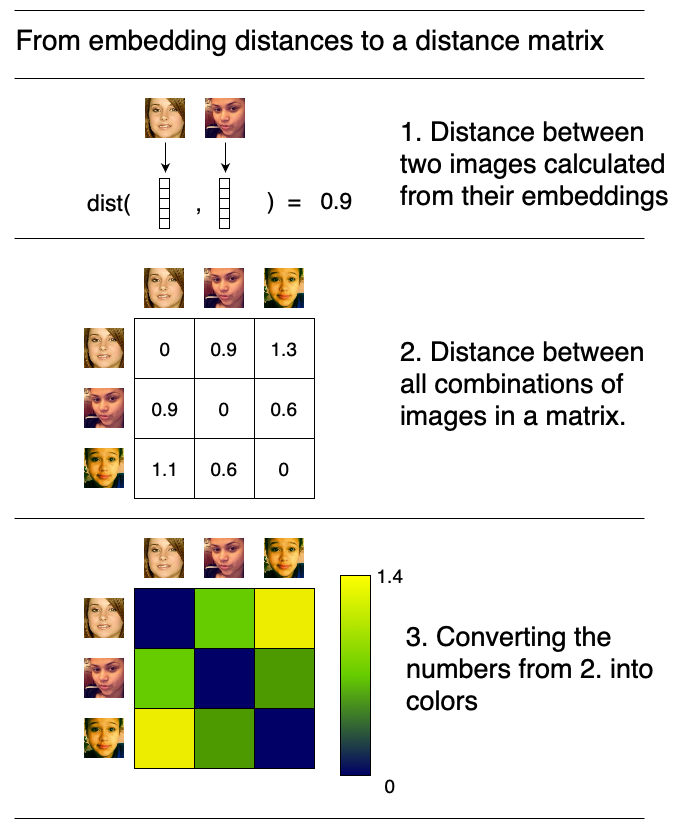 What do you observe? The faces of which group are more similar to each other for the Face Detection algorithm?

Lastly, to show the importance of the dataset which you use to pretrain your model, look at how much space white men and women take in different embeddings. FairFace is a dataset which is specifically created with completely balanced classes. The blue dots in all visualizations are white male and white female.

Adopted from Kärkkäinen and Joo, 2019, arXiv

Section 3: Within Sum of Squares¶

We can try to put this observation in numbers. For this we work with the embeddings. We want to calculate the centroid of each group, which is the average of the 49 embeddings of the group. As each embedding vector has a dimension of 512, the centroid will also have this dimension.

Now we can calculate how far away the observations \(x\) of each group \(S_i\) are from the centroid \(\mu_i\). This concept is known as Within Sum of Squares (WSS) from cluster analysis.

The Within Sum of Squares (WSS) is a number which measures this variability of a group in the embedding space. If all embeddings of one group were very close to each other, the WSS would be very small. In our case we see that the WSS for the black females is much smaller than for the white females. This means that it is much harder for the model to distinguish two black females than to distinguish two white females. The WSS complements the observation from the distance matrix, where we observed overall smaller pairwise distances between black females.

Let’s calculate the WSS for the two groups of our example.

In this tutorial we have learned how to apply a modern convnet in real application such as facial recognition. However, as the state-of-the-art tools for facial recognition are trained mostly with caucasian faces, they fail or they perform much worse when they have to deal with faces from other races.