Performance Analysis of DQN Algorithm on the Lunar Lander task

Performance Analysis of DQN Algorithm on the Lunar Lander task¶

In this project, the objective is to analyze the performance of the Deep Q-Learning algorithm on an exciting task- Lunar Lander. Before we describe the task, let us focus on two keywords here - analysis and performance. What exactly do we mean by these keywords in the context of Reinforcement Learning (RL)?

In a standard RL setting, an agent learns optimal behavior from an environment through a feedback mechanism to maximize a given objective. Many algorithms have been proposed in the RL literature that an agent can apply to learn the optimal behavior. One such popular algorithm is the Deep Q-Network (DQN). This algorithm makes use of deep neural networks to compute optimal actions. In this project, your goal is to understand the effect of the number of neural network layers on the algorithm’s performance. The performance of the algorithm can be evaluated through two metrics - Speed and Stability.

Speed: How fast the algorithm reaches the maximum possible reward.

Stability In some applications (especially when online learning is involved), along with speed, stability of the algorithm, i.e., minimal fluctuations in performance, is equally important.

In this project, you should investigate the following question:

What is the impact of number of neural network layers on speed and stability of the algorithm?

You do not have to write the DQN code from scratch. We have provided a basic implementation of the DQN algorithm. You only have to tune the hyperparameters (neural network size, learning rate, etc), observe the performance, and analyze. More details on this are provided below.

Now, let us discuss the RL task we have chosen, i.e., Lunar Lander. This task consists of the lander and a landing pad marked by two flags. The episode starts with the lander moving downwards due to gravity. The objective is to land safely using different engines available on the lander with zero speed on the landing pad as quickly and fuel efficient as possible. Reward for moving from the top of the screen and landing on landing pad with zero speed is between 100 to 140 points. Each leg ground contact yields a reward of 10 points. Firing main engine leads to a reward of -0.3 points in each frame. Firing the side engine leads to a reward of -0.03 points in each frame. An additional reward of -100 or +100 points is received if the lander crashes or comes to rest respectively which also leads to end of the episode.

The input state of the Lunar Lander consists of following components:

The actions of the agents are: 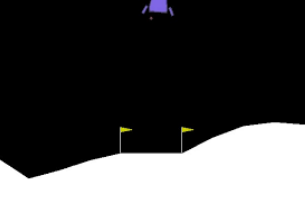 We will now implement the DQN algorithm using the existing code base. We encourage you to understand this example and re-use it in an application/project of your choice!

Now, let us set some hyperparameters for our algorithm. This is the only part you would play around with, to solve the first part of the project.

Now, let us setup our model and the DQN algorithm.

Before we train the model, let us look at an instance of Lunar Lander before training.

Note: The following code for rendering the video is taken from here.

From the video above, we see that the lander has crashed! It is now the time for training!

The training takes time. We encourage you to analyze the output logs (set verbose to 1 to print the output logs). The main component of the logs that you should track is “ep_rew_mean” (mean of episode rewards). As the training proceeds, the value of “ep_rew_mean” should increase. The improvement need not be monotonic, but the trend should be upwards!

Along with training, we are also periodically evaluating the performance of the current model during the training. This was reported in logs as follows:

Now, let us look at the visual performance of the lander.

Note: The performance varies across different seeds and runs. This code is not optimized to be stable across all runs and seeds. We hope you will be able to find an optimal configuration!

The lander has landed safely!!

Let us analyze its performance (speed and stability). For this purpose, we plot the number of time steps on the x-axis and the episodic reward given by the trained model on the y-axis. From the above plot, we observe that, although the maximum reward is achieved quickly. Achieving an episodic reward of > 200 is good. We see that the agent has achieved it in less than 50000 timesteps (speed is good!). However, there are a lot of fluctuations in the performance (stability is not good!).

Your objective now is to modify the model parameters (nn_layers, learning_rate in the code cell #2 above), run all the cells following it and investigate the stability and speed of the chosen configuration.

Exploration (selecting random actions) and exploitation (selecting greedy action) is a crucial component of the DQN algorithm. Explore random actions for a long time will slow down the training process. At the same time, if all actions are not explored enough, it might lead to a sub-optimal performance. In the DQN code above, we have used the following parameters:

Your objective here is to construct a modified reward function that improves the performance of the Lunar Lander. To this end, you would have to create your own custom environment. An example of a custom environment is given below:

Once you have cutomized your own environment, you can execute that environment by just calling:

Note: Refer to this page, if you would like to create more complex environments.

3 Identify the state information crucial to its performance.¶

Your objective here is to alter the input state information and analyze the performance. The input state of the Lunar Lander consists of following components:

You can train the algorithm by masking one of the eight components at a time and understand how that affects the performance of the algorithm. Similar to the reward shaping task, you would have to create a custom environment and modify the state space. Again, you can inherit all the necessary functions and modify the following portion of the “Step” function:

In the Lunar Lander task, the input to the algorithm is a vector of state information. Deep RL algorithms can also be applied when the input to the training is image frames, which is the case in the Atari games. For example, consider an Atari game - Pong. In this environment, the observation is an RGB image of the screen, which is an array of shape (210, 160, 3). To train the Pong game, you can start with the following sample code:

Your obstacle here is to add an obstacle in the path of the lunar lander (by creating a custom environment as described in point 2 above) and train the model such that the lander lands safely, avoiding collisions.

You would first want to devise a mechansim for adding obstacles. For example, you could have an imaginary obstacle at some horizantal and vertical position cooridnates and modify the reward function such that a penalty is levied if the lander comes close to it.

An interesting approach to solve this problem is to apply the techniques of transfer learning. For example, you could initialise the neural network model with the weights of the trained model on the original problem to improve the sample effeciency. This can be done using the following code:

Following are some of the resources on transfer learning that you would want to start with.

5(b) Transfer Learning in minigrid environment¶

These are some simple gridworld gym environments designed to be particularly simple, lightweight and fast. Refer to this repo for a description of the environments. An example to load a minigrid environment is given below.

You can train a standard DQN agent in this env by wrapping the env with full image observation wrappers:

PBRL is an exciting sub-area in RL where the traditional reward structure is replaced with human preferences. This setting is very useful in applications where it is difficult to construct a reward function.

In the earlier section, we have successfully trained the lunar lander to land safely. Here, the path that the lander follows to land safely can be arbitrary. In this project, using the techniques of PBRL, you will solve the lunar lander problem with an additional requirement that the lander should follow a specially curated path (for example, a straight line path). Following are some of the resources that will help you to get started with this project.